10/7/15: A PRINCIPLED SCIENTIST: Celebrating Frances Kelsey’s Life and the Truth of Her History 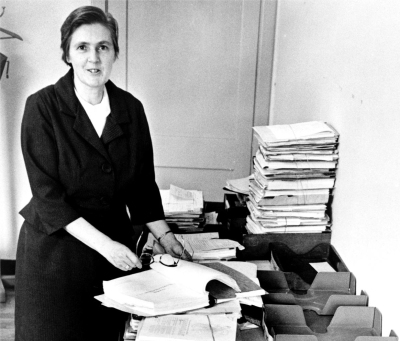 Dr. Frances Oldham Kelsey died this summer at the age of 101.

Dr. Kelsey—Frankie to her friends—holds an exalted status in U.S. medical history for what she did not do. You may not know her name, but you certainly know the effect of the action, or more precisely, the inaction, that she took. On the occasion of her death, I celebrate her life and again set the record straight on what Dr. Frankie Kelsey did and did not do 65 years ago.

As a recently hired review officer at the U.S. Food & Drug Administration, Kelsey did not rubberstamp for approval a New Drug Application (NDA) received Sept. 12, 1960 from the William S. Merrell Co. for a then-popular hypnotic drug in Europe. The generic name for the German-manufactured sleeping aid that Merrell sought to market in the United States under the trade name, Kevadon®, was thalidomide.

Merrell, the Cincinnati-based subsidiary of Richardson-Merrell, Inc., expected its NDA to sail through. In fact, that’s why her supervisor assigned the application to the neophyte Kelsey: It was considered an easy approval.

Thalidomide, which became a frightening household name because of its teratogenic (birth defect-causing) properties, was a sleeping pill, a hypnotic. It was NOT a treatment for morning sickness during pregnancy. I have seen this absurd error about thalidomide perpetuated in news articles repeatedly. I even disputed its claim by a university professor in a developmental psychology course that I audited. It appeared again in obituaries about Dr. Kelsey. That this misconception continues defies all reason. It betrays an ignorance about history.

If thalidomide had been prescribed for morning sickness, there would have been no Merrell NDA at the FDA. The drug, which was synthesized by a West German firm in 1953, would have been discredited and withdrawn years before. If any doctors prescribed it to pregnant women to thwart nausea, they did so on their own, as an off-label use.

My father, Albert Sjoerdsma, knew Frankie Kelsey and her husband, Fred, an organic chemist, at the University of Chicago in the 1940s. A medical student with an interest in research, Dad met Frankie when he became a Ph.D. candidate under Chicago’s renowned pharmacology department founder and chairman, Eugene Maximilian Karl (E.M.K.) Geiling. Frankie was then Geiling’s Ph.D. research associate; she would earn her M.D. in 1950 after the births of her two daughters.

Geiling, M.D., Ph.D., a fastidious bachelor from South Africa who traveled with an entourage of two personal valets and a pet bulldog, had studied under the eminent John Jacob Abel at Johns Hopkins. He officially advised the FDA and the AMA and specialized in the posterior lobe of whales’ and porpoises’ pituitary glands (animal “stand-ins” for human pituitaries). He was a show-stopper in many respects.

According to Kelsey, Geiling selected her to be his first research assistant, sight unseen, because he thought Frances was a man. The salutation in his acceptance letter read: Dear Mr. Oldham. The two never spoke of this “typo.” As a young research team member, Kelsey helped Geiling to identify the toxic agent in a formulation called Elixir of Sulfanilamide, which the S.E. Massengill Co. marketed as a cure for bacterial infections. When the thalidomide NDA crossed her desk, she already had felt the brush of history.

Sulfanilamide, the first widely used sulfa drug, had two commercial drawbacks: It tasted terrible, and it did not dissolve in water or alcohol. To make the drug more palatable, a Massengill chemist developed a cherry-flavored liquid solution in which it would dissolve. Within months of its debut, the best-selling elixir had killed 107 people, mostly children.

Geiling and his students isolated the diethylene glycol solvent in which Massengill dissolved sulfanilamide—a chemical cousin of antifreeze—as the deadly ingredient. According to Kelsey, the company had not run toxicity tests “on so much as a single rat,” and the law did not require otherwise. The sulfanilamide tragedy led to swift enactment of the Federal Food, Drug, and Cosmetic Act of 1938, which required drug companies to prove their products were safe and appointed the FDA as arbiter of the safety data they submitted in a document called a New Drug Application.

After Geiling retired from the University of Chicago in 1956, the professor moved to Washington, D.C., where he taught and served as an FDA consultant. He died in January 1971 at age 79 after living with Alzheimer’s disease for many years. Frankie Kelsey devotedly cared for him as his legal guardian.

When I interviewed the soft-spoken Dr. Kelsey at her Bethesda, Md. home in 2001, in preparation for the biography I would write about my father, she described Dad and Wallace “Turtle” Tourtellotte, the buddy/fellow med student who persuaded him to get a Ph.D. in pharmacology, as “a refreshing pair, such pleasant creatures.”

About 20 years later, on Sunday, July 15, 1962, Frankie and Fred Kelsey and my parents were refreshing themselves with Manhattans and pleasant conversation on the screen porch of my childhood home when the phone rang . . . “and my mother ushered Frankie Kelsey into her study,” as I recalled in my book, “Starting With Serotonin: How a High-Rolling Father of Drug Discovery Repeatedly Beat the Odds.”

“Soon,” I wrote, “the older woman was speaking with an NBC radio interviewer about a recent decision of hers, reported that morning on the front page of The Washington Post.” I continue:

Although safe for its intended patients, thalidomide had proved devastating to the fetuses of women who took it during their first trimester of pregnancy. The drug corrupted fetal limb development, causing the births of babies with shortened, flipper-like arms and legs. Toes grew directly from their hips, and hands sprouted at their shoulders.

Even as a child, I understood this tragedy and how Americans had been spared. As I listened on Dad’s transistor radio to the words that Kelsey spoke into Mom’s white rotary telephone, I became awestruck. Nearly forty years later, an eighty-seven-year-old Frances Kelsey, widowed since 1966 and still working part-time at the FDA, would tell me that she remembered a girl, about seven, solemnly saying, “History is being made in our house today.” It was a big pronouncement, she remarked, “for one so small.” Kelsey herself thought the news “would all blow over in a week.”

Of course, it did not. In a striking parallel to the sulfanilamide tragedy, the thalidomide tragedy led to a revolution in the U.S. drug laws; the power, structure, role, and operations of the FDA; and the conduct of preclinical studies in animals.

According to veterinary pathologist and toxicologist James W. Newberne, who worked with my father during the second half of Dad’s career, “Before the ’60s, there wasn’t any serious teratologic work done.” No government anywhere evaluated the human birth-defect risks from drugs, environmental chemicals, or radiations. Physicians presumed that defective genes caused congenital abnormalities.

Teratology is the study of congenital abnormalities, i.e., birth defects. The absence or shortening of extremities that thalidomide caused is known as phocomelia.

A charter member of the Teratology Society, Jim Newberne, now 92*, helped to set up animal teratologic testing protocol in the United States. According to him, University of Cincinnati professors James G. Wilson and Josef Warkany, who co-founded the Teratology Society, “started on a program to develop teratologic studies [that] became the order of the day . . .. It was only then that animal SOPs [standard operating procedures] were set up. But it was an evolving process, and it took years.”

In 1966, the FDA issued its “Guidelines for Reproduction Studies for Safety Evaluation of Drugs for Human Use.”

I relate the thalidomide story, as Kelsey and my other sources told it to me, in “Starting With Serotonin.” It was precisely because thalidomide was such a popular sleeping pill (in about 45 countries) that Kelsey scrutinized Merrell’s NDA. According to Dad, people were traveling to Europe just to get a supply. Kelsey, thus, knew that, if approved, Kevadon® would receive mass circulation among healthy Americans. She had absolutely no reason to believe that the drug caused any untoward effects, much less birth defects. It was Merrell’s arrogance that drew her attention.

The clinical reports in the drug company’s NDA, as Kelsey recalled, “were really more testimonials than scientific studies,” and its claims seemed “too good to be true.” Before she would sign off on Kevadon, Kelsey needed to be certain about the drug’s safety. Geiling had taught her well. She wanted real scientific evidence, not just representations.

I link HERE my account of how Dr. Frances Oldham Kelsey became, through caution and delay, an overnight celebrity and the heroine of thalidomide. In many respects, what occurred was a fluke, a matter of unanticipated fate. That doesn’t change the fact that Frankie Kelsey was a principled scientist who refused to be intimidated by a bullying pharmaceutical company. She stood her ground.

Ultimately, thalidomide use by women in early pregnancy resulted in the births of more than 10,000 severely deformed babies worldwide. Because of the drug’s ready availability, 17 American children with associated defects were born—10 in the United States and seven abroad.

Dr. Kelsey was not one to publish. During our several meetings in 2001, she brought out files in which she kept rough typewritten accounts and scraps of notes about the thalidomide NDA and the decisions she made. Every scrap of yellowed paper and every word on each scrap are important testaments to human history. I hope they have been preserved.

*I received word several weeks after I wrote this post that Dr. Newberne died on Oct. 20th. He was a formidable scientist, a great friend to my father, and a gentle man.