SPECIAL NOTE: During February, National Heart Month, my publisher is offering a discount on my book, “Our Parents in Crisis: Confronting Medical Errors, Ageist Doctors, and Other Healthcare Failings,” to my Facebook readers. An autographed copy of my book is selling for $20, marked down from $27.95, and shipping is free. Please click on the Facebook link on the Improbable Books website at http://improbablebooks.com/parents.html, if you’d like to take advantage of the offer. Thank you. 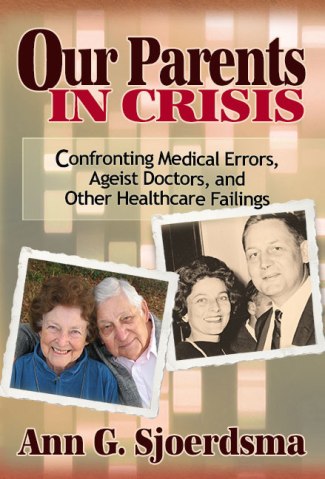 On the evening of Friday, June 7, 2002, 78-year-old Fern Sjoerdsma lay in a Chesapeake, Va., hospital bed, moaning and breathing rapidly and laboriously. Her whole body seemed bloated, especially her legs. She failed to respond coherently to questions that her daughter Ann asked and acted irritated by her attempts. She was disoriented and withdrawn, listless, but also fitful.

Just two hours before, Ann’s father, a distinguished scientist-physician, and brother had left, without questioning her mother’s status. What had happened in the interim? Ann wondered. Was Mom having an adverse reaction to some medication? Her mind raced: “What should I do?”

What author Ann G. Sjoerdsma did was endure what she describes in the compelling, fast-paced first chapter of her eye-opening new book, an “interminable night,” as she sought to convince the “placid, polite, yet intractable” hospital physician attending to her mother that his perceptions were faulty, and he had to take action.

“Much to my amazement,” she writes “[he] couldn’t—or wouldn’t—see the deterioration in Mom that was so evident to me. He described her as having ‘slight edema’ and being more uncommunicative, but not that confused. When he questioned her about pain, she denied having any. I pointed out her stoical habit of minimizing her discomfort, but he attributed her fever and rapid breathing to the meningitis infection.

“‘She’s very sick,’” he concluded. ‘Her brain is fighting a serious infection.’

“Yes, but caused by what?” Ann asked herself. Based on the medical research she had done, haemophilus influenzae meningitis didn’t make sense, and the antibiotic therapy wasn’t working.

For the next hour, the hospitalist calmly talked about her mother’s worsening condition with Ann—as well as with her father and older sister, a nurse, whom she called on the room telephone—and resisted all of their suggestions. He wouldn’t summon a pulmonary expert, and, Ann writes, “He adamantly refused my request to transfer Mom back to the ICU,” asking “how could he justify to his supervisor having moved her out just the day before?” Under their questioning, he grew defensive. Ann relates:

Finally, Dr. Amble admitted to me: “I don’t know what I’m treating.”

But he failed to add what I thought any conscientious professional in any profession should add: “But I’ll find out.”

I never raised my voice or lost my cool. I searched for an angle, a way to break through to him. Finally, I asked Dr. Amble: “What would you do if you were in my position?” a question I have learned is the question to ask an obstructive doctor. I’ll never forget his response.

“I’d kiss my mother, tell her I love her, and let the hospital take care of her,” he said.

“Well, I can’t do that,” I replied. “I can’t leave.” My mother wasn’t going to die because a doctor didn’t know what he was treating.

During her mother’s illness, which was misdiagnosed by a succession of physicians until the family arranged for her transfer to Duke Medical Center, Ann discovered a new calling and passion: medical advocacy. “Our Parents in Crisis” is her engaging and well-informed story of advocating for her parents over the ensuing 12 years in the highly fragmented, error-prone, and ageist U.S. healthcare system.

AVAILABLE FOR PURCHASE at improbablebooks.com, amazon.com, barnesandnoble.com, and select bookstores. See “Contact Info” on this website for more information.