12/11/15: OUR PARENTS IN CRISIS: Advocate, Trust Your Instincts, Do Your Homework 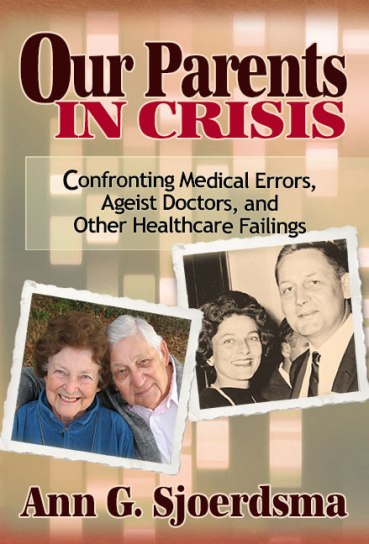 Today is my red-letter day: the official release date for my new book, “Parents in Crisis: Confronting Medical Errors, Ageist Doctors, and Other Healthcare Failings.”

The book’s publication culminates a journey that began for me more than 13 years ago, on a miserable night when I went head-to-head with a Virginia hospitalist who could not or would not see how sick my mother was and how she was fast declining. I was stunned by his intractable resistance.

I relate this encounter in the compelling (so I’ve been told) first chapter of my book, which I titled: “2002: Proceed Until Apprehended, Or You Might Lose Your Mother.” In the ensuing 18 chapters, I describe other obstacles I encountered in hospitals, doctors’ offices, nursing homes, and elsewhere in the healthcare system while caring, and advocating, for my parents, who, being physicians, already knew the dangers and pitfalls and were on guard.

You might say I came well-schooled in the risks, but I had a lot to learn.

In “Our Parents in Crisis,” I describe how to confront obstacles of the system through the acquisition of knowledge—I impart many lessons about basic anatomy and physiology, diseases prevalent in older age, and the facts of normal aging, to guide you—and the acquisition of an advocate’s backbone and voice. I never forget that I’m not a doctor, and I greatly value all physicians who have astute medical minds and empathy for their patients and their patients’ families, but I also trust myself.

As an advocate, I live by four basic guidelines:

No. 1: Trust your instincts.

No. 3: Think and behave reasonably.

My parents were independent and self-reliant into their 80s, but then challenges started occurring: a pulmonary embolus after knee surgery; falls leading to hip and leg fractures; atrial fibrillation no longer reliably controlled by medication; urinary symptoms of an “enlarged” prostate; suspicious lung nodules; neurological difficulties; cognitive impairment.

So often when I turned to the healthcare system, I found it to be unhelpful: fragmented, error-prone, unresponsive to the needs at hand, and generally patient-unfriendly. Time-pressed doctors too often engaged in ageism and what I call “No-Think,” a tendency to rush to judgment, particularly to an at-the-ready diagnosis, without much critical thinking, and then to reinforce judgments without further reflection. At other times, “No-Think” translated to “He’s old. What do you expect?”

“Proceed until apprehended” became my family’s rallying cry during a 2002 medical crisis with my then-78-year-old Mom. My older sister Leslie, a nurse who no longer works clinically, coined it when I expressed doubt about entering certain hospital zones, such as the intensive care unit after midnight.

Proceed until apprehended, she told me. Act like you belong.

Be assertive. Don’t be deterred. Doctors make mistakes, especially with diagnoses of diseases that they’re not used to seeing and don’t expect to see. Persist with your questions and your skepticism. Proceed until apprehended.

By the time I sat at my delirious and breathless mother’s bedside with “Dr. Amble” on that interminable Friday night, June 7, 2002, Mom had been seen on an emergency basis by at least three other physicians.

I scoffed at the diagnosis offered by the first internist of a urinary tract infection, a UTI. Although I knew that such infections could be severe, Mom’s flu-like illness, which had come on suddenly and had progressed into extreme lethargy, weakness, loss of appetite, and confusion did not fit the UTI bill. I later learned that UTIs are over-diagnosed in older women. It’s a go-to diagnosis, part of “little old lady syndrome.”

The second physician, an emergency medical specialist at our local hospital, accepted the UTI diagnosis and went off his shift without talking to me or my father. He didn’t care about Mom’s history or our observations. After Dad gratefully went home, I pressured the third physician to get to the bottom of her diagnosis. He eventually came up with haemophilus influenzae meningitis, a highly infectious and potentially fatal bacterial disease.

My family had suspected that Mom might have contracted meningitis, so we (I) insisted on a spinal tap. After the “h-flu” diagnosis, Mom was transferred to the ICU at the main hospital in Chesapeake, Va. The Outer Banks ER doctor advised me that a neurologist and infectious disease specialist would be called in for a consult. The Chesapeake hospitalist, Dr. Amble, decided they were not necessary. That was a red flag for me. Others waved during my first meeting with the nonchalant Dr. Amble.

Despite receiving the recommended antibiotic regimen for h-flu, Mom was not improving very much. When I arrived on the evening of June 9th, her appearance shocked me. She had deteriorated markedly in the 24 hours since I’d seen her. What in the world was going on? I wondered. As I write:

Mom lay in bed, moaning and breathing rapidly and laboriously. Her whole body, especially her legs, seemed bloated. She failed to respond coherently to questions I asked and acted irritated by my attempts, scowling at me as she had after the day spent at the Kitty Hawk clinic. She was disoriented and withdrawn, listless, but also fitful. Dad and Al [my brother] had left just two hours ago. What had happened? Was she having an adverse reaction to some medication? My mind raced. What should I do?

I sprang into action, calling upon nurses for help, calling my sister and father for advice, even calling the neurologist husband of a friend of mine, until I finally arranged to sit down with Dr. Amble and calmly discuss the situation.

Much to my amazement, Amble couldn’t—or wouldn’t—see the deterioration in Mom that was so evident to me. He described her as having “slight edema” and being more uncommunicative, but not that confused. When he questioned her about pain, she denied having any. I pointed out her stoical habit of minimizing her discomfort, but Amble attributed her fever and rapid breathing to the meningitis infection.

“She’s very sick,” he concluded. “Her brain is fighting a serious infection.”

Yes, but caused by what? H-flu didn’t make sense [I had done my homework], and the therapy wasn’t working. Not only had Mom’s physical condition declined, but her personality had altered. A gracious, sweet person, she now snapped at us for making noise.

For the next hour, Amble calmly talked about Mom’s worsening condition with me—as well as my father and Leslie, whom I called on the room phone at opportune moments—and resisted all of our suggestions. Under our questioning, he grew defensive. He acknowledged that my father and “his friends are very impressive,” but Dr. Amble, too, was not to be lightly dismissed.

Amble adamantly refused my request to transfer Mom back to the ICU. If he did that, he asked me, how could he justify to his supervisor having moved her out just the day before? I didn’t give a shit, but I was never anything but courteous with him. My brother, who listened in on Amble’s stonewalling conversations with my father, remembers the Chesapeake hospitalist telling them: “She’s getting better.”

Lest I think he lacked medical muscle, Amble defended his credentials and staff status, telling me of his previous experience at a hospital whose reputation, I now knew, far exceeded Chesapeake’s. He also pointed out: “I know I’m talking to a lawyer.”

Doctors don’t much like lawyers—really, who does?—so I had made sure that Dr. Amble knew I was one. My opinion on medical malpractice notwithstanding, lawyers can hold doctors accountable. That status gave me leverage. Amble didn’t have to know that I had stopped practicing years ago. But, if he actually thought I had a lawsuit even remotely in mind, he was way off-base. Families of critically ill patients don’t want litigation after mistakes have been made; they want results while there’s still time.

Despite my father’s appeal for one, Amble wouldn’t summon a pulmonary expert during the night. Any consult could wait until morning, he said. If we wanted to move Mom to Duke [which we had investigated doing] then, he’d be more than happy to refer her. I’m sure he thought we were the family from hell, but I wasn’t liking him very much either.

Finally, Dr. Amble admitted to me: “I don’t know what I’m treating.”

But he failed to add what I thought any conscientious professional in any profession should add: “But I’ll find out.”

I challenged myself: How could I reach this placid, polite, yet intractable man? How could I convince him to take some action?

I never raised my voice or lost my cool. I searched for an angle, a way to break through to him. Finally, I asked Dr. Amble: “What would you do if you were in my position?” a question I have learned is the question to ask an obstructive doctor. I’ll never forget his response.

“I’d kiss my mother, tell her I love her, and let the hospital take care of her,” he said.

“Well, I can’t do that,” I replied. “I can’t leave.” [My mother] wasn’t going to die because a doctor didn’t know what he was treating.

That night I learned: Proceed until apprehended, and you just might save your mother’s life.

At Duke, Mom received a correct diagnosis and life-saving treatment. My father had been on the right track in his diagnostic thinking; none of the physicians who had examined Mom in the Outer Banks and in Chesapeake had been even close.

You would think that after we entrusted Mom to one of the best medical centers in the country that my family could collectively rest and breathe again. But, shockingly, Duke’s physicians and nurses presented us with more “obstacles.” I moved to Durham to protect Mom during her lengthy hospitalization and her subsequent rehab in a skilled nursing facility.

That summer I discovered a new calling and passion: medical advocacy. Thirteen years later, you can read about my journey in “Our Parents in Crisis.” I did not always achieve results I would have liked—especially when I succumbed to burnout—but I always fought for my parents who, simply because of aging, needed my protection.