8/17/16: BEWARE OF CLOTS: The Risk of Deep-Vein Thrombosis and Pulmonary Emboli After Surgery and in the Hospital 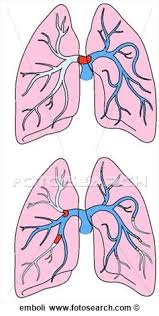 NOTE: Recently, I published two lengthy posts on my Facebook page about the risk of life-threatening blood clots, particularly after surgery and/or associated with bed rest, and how to anticipate and prevent them. This blog combines those two posts and adds a bit more to the discussion.

A blood clot “thrown” from the leg to the lungs—at which point it becomes a pulmonary embolus (aka embolism)—is a common and potentially lethal hazard of major surgery and/or too much bed rest (immobility), especially for older patients with damaged circulation. My mother almost died after a knee arthroplasty from a massive “saddle” embolus lodged between the openings of the branches to her pulmonary arteries. (See pair of lungs at the top in the illustration above.)

Then 82, Mom knew that after a total knee replacement, her risk of developing deep-vein thrombosis (DVT), which can lead to a fatal pulmonary embolus (PE), was 50 percent or higher if she did not take a pharmacological (drug) prophylaxis. Prophylaxis means prevention. DVT occurs when a thrombus (a clot) forms in a wall of one of your large veins, usually in your calf, in an area where the blood flow is slow or disturbed. Collectively, DVT and PE are known as venous thromboembolism or VTE.

My mother dutifully had injections of the anticoagulant, Lovenox®, as prophylaxis, but perhaps not for as long as she should have, if an expert in VTE had advised her. Post-surgery, she also wore compression stockings; slept with her legs in a bulky device that stimulates blood flow by applying intermittent pneumatic compression (inflating and deflating air bags); and did a month of physical therapy.

These measures did not thwart the disaster that almost cost her life. When she started having progressively worsening shortness of breath, we immediately feared a pulmonary embolus and sought medical intervention.

After a time-wasting visit with Mom’s primary-care physician, whose misdiagnosis of bronchitis sent me up the wall, my father and I got her the help she needed. I’ll never forget the look of shock on the radiological technicians’ faces: They couldn’t believe she was still alive. (I detail this emergency in my book, “Our Parents in Crisis: Confronting Medical Errors, Ageist Doctors, and Other Healthcare Failings.”)

Being sedentary for a prolonged period, as with bed rest or other immobility, slows your venous blood circulation, which is the return flow of deoxygenated blood through veins from the body’s periphery (feet, legs) to the heart. Major surgery, particularly procedures involving the abdomen, pelvis, and lower extremities, also can disrupt blood flow, resulting in stagnancy and clotting. After surgery, the body often tries to stop bleeding and to heal injury to vessels, producing more clotting.

A pulmonary embolus develops when a fragment of a thrombus breaks loose (embolizes) from a vein wall and migrates through the venous circulation to the lungs. If the clot is large enough to obstruct one of the pulmonary arteries, sudden death can result.

My brother, who is now 59, has experienced two clots, on separate occasions, lodged in vessels of the lower lobe of his right lung. (The right lung has three lobes; the left lung, two.) The first time he was only 48, and he attributed the clot to a long airplane trip he took in which he did not rise from his seat. (There also may be a genetic propensity for clotting on my mother’s side of the family.) Both times, my brother was treated with the anticoagulant Coumadin®, which is known generically as warfarin. He’s now an anticoagulant lifer. Anticoagulants thwart clotting and, thus, keep blood flowing.

To understand the pulmonary-embolus threat, it’s important to know some circulation basics.

Your venous blood enters the right side of your heart, which propels it to the lungs, where it releases carbon dioxide and receives oxygen. (This is the respiratory exchange process.) After being enriched with oxygen, your blood flows from your lungs into your heart’s left side, which propels it out to the arterial system.

Pressure generated by the heart propels arterial blood (oxygenated blood in arteries), whereas venous blood moves back to the heart via skeletal-muscle contractions that constrict the vessels. Medium and large veins also have valves that keep your blood from yielding to gravity and flowing backward. A failure of muscle contraction and/or insufficient valves can result in blood pooling and clotting in the lower extremities. (My mother, we discovered, has faulty valves. At 92, she takes an anticoagulant and wears compression stockings every day. The tight-fitting hosiery applies graduated pressure on the lower leg and foot to increase blood circulation.)

According to the medical sources that I consulted for “Our Parents in Crisis,” more than 900,000 people in the United States suffer VTE each year. In 400,000 of them, the condition manifests itself first as deep-vein thrombosis; in the other 500,000, as a pulmonary embolus. As many as 300,000 people die annually in the United States from acute PE, which is often not diagnosed until an autopsy, if at all. Fewer than 5 percent of all deceased individuals are autopsied, a statistic that I find shocking. It’s quite likely that thousands of “coronary artery disease” victims actually suffered fatal pulmonary emboli.

To use an anticoagulant effectively as prophylaxis, you must take the correct dosage for a sufficient duration, details that your physician or surgeon may not know. You may have to do some homework and advise them. Aspirin, which I discussed in my 7/24/16 blog entry, inhibits platelet clumping, but it is not classified as an anticoagulant.

Whenever a person is hospitalized—particularly if he or she is acutely ill, such as with heart disease or cancer—he/she has a risk of developing deep-vein thrombosis. As an advocate for your hospitalized loved one, you can assess his/her individual risk of developing VTE and assist in suggesting preventive measures.

I explore the risk of VTE in “Our Parents in Crisis.” The following is an edited excerpt from Chapter Three, “2006: Bronchitis or a Massive Blood Clot?”:

“If your Mom or Pop is a surgical patient, you can reasonably expect the surgeon to be tuned into prophylaxis, provided the procedure is orthopedic, especially a hip or knee replacement. But he or she may not know the best drug regimen . . . . Further, general surgeons performing major nonorthopedic surgeries are less likely than the orthopods to be aware of the DVT and PE threats.

“In either case, medical or surgical, you must be a watchdog. I encourage you to independently evaluate your parent’s risk of developing VTE and to discuss that risk with his or her physician or surgeon.*

“The recognized precipitating or risk factors for venous thromboembolism are:

*Cancer and its treatment (tumors can promote clot formation; chemotherapy is a risk)

*Trauma (especially fractures of the pelvis, hip, or leg)

*Obesity (a body mass index of more than 30, where BMI is the patient’s weight in kilograms divided by the square of his or her height in meters)

“According to a 2008 review by [Dr. Victor F. Tapson of Duke’s pulmonary and critical care medicine division]: ‘Total hip and knee replacement, surgery for hip fracture, and surgery for cancer impart particularly high risks, as do trauma and spinal cord injury.’

“Markedly reduced mobility, such as occurs with the dreaded BED REST, ‘also confers an increased risk,’ writes Tapson, but the degree and duration of reduced mobility that trigger the increase ‘remain unclear, often depending on concomitant risk factors.’

“‘Other threats of thromboembolism,’ he continues, include ‘prolonged air or ground travel [and] a sedentary lifestyle and occupations involving long periods of sitting’—such as book writing or other computer-driven work.

“There actually is such a thing as eThrombosis. It describes thrombotic events related to ‘extended periods of sitting at a computer terminal.’ . . .

“Dr. [Charles W.] Francis of the University of Rochester [Dept. of Hematology and Oncology] believes that all patients should be assessed for their VTE risk upon admission to a hospital and then reassessed when their status changes, such as after surgery. He supports prophylaxis for medical patients who are older than 40, have limited mobility for three days or more, and have at least one risk factor.

[This is excellent advice!]

“If you think your Mom or Pop should be receiving a preventive anticoagulant, talk to the physician in charge. The American College of Chest Physicians’ 2008 clinical practice guidelines suggest several strategies that have been shown to decrease DVT rates and recommend that every hospital develop a formal policy for VTE prevention. If you meet medical resistance, ask to see that policy and be prepared to proceed until apprehended. Don’t let the system’s failure defeat you. . . .

“I was much gratified to read [Harvard cardiovascular specialist Dr. Samuel Z.] Goldhaber’s and his colleagues’ opinion that ‘an unexplained shortness of breath should trigger the suspicion of PE by lay persons and health-care professionals.’

“I urge you to think clot.”

*I have removed the footnotes.