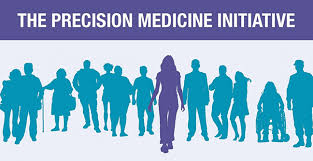 *PRECISION MEDICINE: an approach to medicine that takes into account “individual variability in genes, environment, and lifestyle.*

In his January 2015 State of the Union address, President Obama announced a new initiative to launch “precision medicine,” a term that, although known and used in biomedical research circles, lacked prominence  and clout until this speech.

The “Precision Medicine Initiative,” Obama said, “[will] bring us closer to curing diseases like cancer and diabetes—and [give] all of us access to the personalized information we need to keep ourselves and our families healthier.”

The nation that “eliminated polio and mapped the human genome,” the President boldly avowed, to bipartisan support, would lead a “new era of medicine, one that delivers the right treatment at the right time.”

Ten days after his address, the President reportedly shared his vision for the Precision Medicine Initiative (PMI) at a White House event with “patients, advocates, scientists, and industry leaders,” the most important being the National Institutes of Health (NIH).

The President called for $215 million in fiscal year 2016 to support the PMI, of which $130 million would be allocated to the NIH to build a national, large-scale research participant group, called a cohort. (See https://www.nih.gov/precision-medicine-initiative-cohort-program.)

The Bethesda-Md.-based NIH, which consists of 27 different institutes, has defined precision medicine as “an approach to disease treatment and prevention that seeks to maximize effectiveness by taking into account individual variability in genes, environment, and lifestyle.”

Driven by advances in various technologies, including strides in genomics, the precision medicine approach requires the collection and analysis of an enormous amount of patient data. There is no other way to know the individual variability upon which the PMI depends.

In March 2015, NIH Director Dr. Francis S. Collins formed the PMI Working Group of the Advisory Committee to the Director and tasked it with developing a plan for “creating and managing” a “research cohort of one million or more Americans that will provide the platform for expanding our knowledge of precision medicine approaches and that will benefit the nation for years to come.”

The Working Group has three co-chairs, one on the NIH staff, and the other two based in academia, the Yale University School of Medicine and Duke University.

The “ultimate goal” of this initiative, the PMI Working Group reported to the NIH director in September 2015, is to move the United States “into an era where medical treatment can be tailored to each patient.” In particular, the initiative aspires to be able to predict how different patients with the same disease will respond to the same medication, and, therefore, to improve therapeutic effectiveness on an individual basis.

The Working Group cites as early successes of precision medicine the development of targeted treatments for cancer and cystic fibrosis “that are effective in patients who share an underlying causal genotype.” Indeed, NIH Director Collins has called oncology “the clear choice for enhancing the near-term impact of precision medicine.” New tools can extract important information from cancer genomes, including the types of mutations that occur.

In these examples, however, the cohort is small, consisting only of those patients who possess the genomic variance that gave rise to their cancer or cystic fibrosis.

The President’s FY 2016 budget for the PMI included a separate allocation to the National Cancer Institute for genomic research in cancer, where causation between changes in DNA and the development of cancer, most notably in breast cancer, has been established.

When I read the PMI Group’s definition of precision medicine, I thought: Wait a minute. Isn’t this exactly what Personalized Medicine, the highly touted movement toward individualized patient treatment of about five years ago, was supposed to do?

Wasn’t Personalized Medicine supposed to move us toward tailoring medical treatment for each patient—which, I might add, I always thought was the goal of all medicine?

“Personalized Medicine,” write An, of the University of Chicago, and Vodovotz, of the University of Pittsburgh School of Medicine, in a 2015 Translational Medicine article, “was ushered in by the ability to sequence the Human Genome and that assumption that it would be economically tractable to sequence the entire population—and to tie that information to large databases concerning demographics, medical histories, and responses to existing drugs in order to find what therapies worked best for which individual patients.

“Precision Medicine is now touted because we can sequence more people and collect more metadata about more existing therapies,” the two surgery professors with expertise in computational and systems biology explain, “but we realize that the likeliest path to success comes from analyzing precisely-defined sub-groups of patients.

(See my 9/12/16 blog on “Genomics 101” for background. Sequencing of the human genome was achieved in 2003, but there is still much about genes, which take up 2 percent of the genome, that scientists do not know. It is possible today to sequence and analyze a person’s genome—all of his or her DNA—in just a few days and for only $1,000.)

“So, is this really a fundamental change in how we approach healthcare?” An and Vodovotz ask.

“In a word, no,” they answer. Personalized medicine “did not deliver,” the professors say, and precision medicine will not likely deliver, either.

My own thoughts, upon studying up, are that precision medicine, thus far, is largely politics and aspirations, on the one hand, and doubt and skepticism, on the other. Admittedly, I have only a broad grasp of it.

As An and Vodovotz say, precision medicine is based on precisely defining and analyzing subgroups of patients (those with heart disease or diabetes, for example, who respond to certain therapies) through biological samples (blood and other bodily specimens), genetic data, and diet and lifestyle information.

In its September 2015 report to Director Collins outlining the PMI Cohort Program, the PMI Working Group sets forth an infrastructure blueprint for building the patient pool from which such subgroups would be defined. It proposes to form a cohort of participants/patients that broadly reflects the diversity of the U.S. population, socially, racially, ethnically, geographically, and economically, and includes all age groups and health statuses. The Working Group estimates that recruitment and organization of the initial one-million-person cohort will take four years.

The PMI Cohort Program, according to the NIH, will be a “participant-engaged, data-driven enterprise supporting research at the intersection of human biology, behavior, genetics, environment, data science, and computation.”

That’s a complex intersection. In short, the success of the Precision Medicine Initiative will depend upon standardized data generation and collection. According to the report, biological samples of the cohort will be stored in a central “biorepository” or “biobank,” and all other information will be stored and accessed through electronic health records.

“Thanks to advances in genomic technologies, data collection and storage, computational analysis, and mobile health applications over the last decade,” the PMI Working Group says, “the creation of a large-scale precision medicine cohort is now possible in a way that it was not before.”

But, as Drs. An and Vodovotz aptly point out, correlation, which is the “output of Big Data,” does not imply “causality.” In other words, they say, the more data you have, the more explanations you have for how those data came about. Big Data can confound, as much as elucidate.

In the May 26, 2016 New England Journal of Medicine article, “Will Precision Medicine Move Us Beyond Race?,” the authors describe precision medicine as being “premised on the idea of improving health outcomes by generating and using many sources of personal data to more accurately group and treat patients.” An and Vodovotz call it “data-driven patient segregation” and are cautious.

I think it’s likely that the sheer breadth of data collected for the cohort will impair the ability to draw definitive or “precise” conclusions about people with such common diseases as diabetes, heart disease, Alzheimer’s disease, obesity, and mental illness—all of which are targets of the PMI Working Group. But I am not basing that observation on any specialized knowledge of data-gathering or computational analysis. Simply thinking critically, I can easily see how this ambitious multi-task initiative could falter in its execution.

NIH Director Francis S. Collins and Harold Varmus, then-director of the National Cancer Institute, address “A New Initiative on Precision Medicine,” in The New England Journal of Medicine, 2/26/15, at http://www.nejm.org/doi/pdf/10.1056/NEJMp1500523.

“What is ‘Precision Medicine’—and Can It Work?” by Gary An, M.D., and Yoram Vodovotz, Ph.D., Translational Medicine, 3/9/15, at https://www.elsevier.com/connect/what-is-precision-medicine-and-can-it-work.