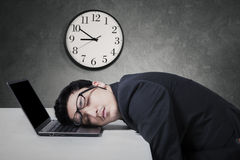 Sunlight plays a major role in setting human circadian rhythms, or what people like to call your biological clock. When your exposure to sunlight changes with a return in  autumn to standard time, as will happen this Sunday at 2 a.m., your body—that is, its physiological processes, of which the sleep-wakefulness cycle is a critical one—has to adjust.

Fortunately, your body can cope rather easily with a sudden one-hour change. With this weekend’s “fall back,” you may wake up earlier than you need to or would like to and feel drowsy at slightly different times than before, but your endogenous clock, which operates on a roughly 24-hour cycle, corresponding to the Earth’s rotation on its axis (a solar day), will manage the shift. You will function reasonably well.

Circadian rhythms are regulated by suprachiasmatic nuclei of neurons located in your hypothalamus, which is an impressive multi-tasking control center in the middle of your brain. Your hypothalamus exerts a major effect on your nervous and endocrine systems and keeps your body in its normal, balanced state of being known as homeostasis.

Contemplating this weekend’s time change put me in mind of some breakthrough discoveries about sleep and wakefulness about which I wrote in Chapter 16 of my biography, “Starting With Serotonin: How a High-Rolling Father of Drug Discovery Repeatedly Beat the Odds” (2008). (Check out “Starting With Serotonin” at www.improbablebooks.com; for sale at $25.)

The word circadian, which combines the Latin words circa (about) and dies (day), did not even exist until 1959.

Printed below is an excerpt from my book, which is chock-full of fascinating breakthroughs that influenced my father’s own pioneering work with neurotransmitters. The Nathaniel Kleitman-Eugene Aserinsky REM sleep “collaboration” is a classic among historic scientific pairings that clashed, but somehow produced spectacular results.

UNIVERSITY OF CHICAGO PHYSIOLOGIST NATHANIEL KLEITMAN had been studying sleep and wakefulness for nearly thirty years when his twenty-nine-year-old graduate assistant, Eugene Aserinsky, discovered rapid-eye-movement (REM) sleep in his lab in 1951. The breakthrough disproved the popular medical concept of sleep as timeout for a weary brain and sparked tremendous interest in sleep research and treatment for sleep disorders.

Born in 1895, Kleitman, a multi-lingual Russian immigrant, trained at Chicago (Ph.D., 1923) under the iconic [physiologist Anton Julius “Ajax”] Carlson and joined the university faculty in 1925. There, he established the world’s first sleep laboratory, equipping it with measuring devices that he both designed and built.13

Sjoerdsma knew of Kleitman during his medical school days [my father was a University of Chicago medical-school graduate], but had been unimpressed. Nobody paid any attention to this crazy guy who was studying people while they were sleeping. . . . Kleitman was not very visible, and I don’t remember a thing about his sleep research. He must have talked about it because he gave us lectures, but he wasn’t very charismatic like some of the other professors were, especially Carlson. . . . He didn’t make that strong of an impression, but I think he was very meticulous.

Meticulous, thorough, driven, and possessed of a flair for inventive research, Kleitman often used himself, friends, and family as subjects. He once stayed awake for 180 hours—more than a week—experiencing and measuring the physiological effects of his sleep deprivation.

In 1939, Kleitman published Sleep and Wakefulness As Alternating Phases in the Cycle of Existence, the first major textbook to explore what he called the “alternating phases in the cycle of existence.” From his study of the rest and activity patterns of infants and children, Kleitman traced the evolution of the human sleep-wakefulness cycle to the standard eight-hour sleep and sixteen-hour wakeful “circadian” rhythm present in most adults. He also notoriously challenged it.

From June 4 to July 6, 1938, the professor and a twenty-three-year-old graduate student attempted to adjust to a twenty-eight-hour schedule—nine hours of sleep and nineteen hours of wakefulness—by living in an underground chamber in Mammoth Cave, Kentucky. Their cave was completely dark, save for illumination by artificial light, and silent, except when they spoke, and its air temperature was a constant 54o F. The two scientists charted their daily fluctuations in wakefulness and body temperature and also evaluated their mental performance. While the student adapted to the new “day” by the end of the first week, and slept comfortably, Kleitman, then forty-three, could not, suggesting that the twenty-four-hour cycle could be unlearned, provided one were young enough to do so.

Eugene Aserinsky sought out Kleitman in 1949 when he was desperately in need of a faculty sponsor for his graduate physiology studies. Temperamental and unpredictable, Aserinsky had a background that even he described as “motley.” In college, he had majored in social science, and then Spanish, become a pre-medical student, and, ultimately, dropped out of dental school.14  Before his acceptance at the University of Chicago, he had worked as a wartime high explosives handler, a social worker, and a government employment counselor.

Interested in organ physiology, but surrounded at Chicago by cell physiologists, and arrogant about science, Aserinsky considered Kleitman’s research “soft.” Kleitman, who needed lab assistants, gave the misfit a chance.

Kleitman had been studying sleep motility cycles in babies, recording their body movements with a homemade device that he attached to crib mattresses. He assigned Aserinsky the task of observing the babies’ blinking prior to their nodding off to sleep to determine if it stopped abruptly or gradually. When Aserinsky noted that, during sleep, the infants’ eyelids quivered, rather than blinked, he proposed studying lid movement, instead. After months of tedious bedside observations, he concluded that during each hourly motility cycle, an infant experienced twenty minutes of ocular quiescence, what he termed a “No Eye Movement Period.”

In need of a doctoral thesis, Aserinsky asked Kleitman if he could study adults’ eye movements during sleep and associate them with known physiological variables, such as body temperature and respiration. He was particularly curious to find out if an adult equivalent of the infants’ twenty-minute quiescent period existed. Although researchers as early as the 1920s had observed slow, rolling, or pendular eye movements in sleeping children and adults, no one had ever recorded ocular motility. Kleitman gave Aserinsky a discarded, old Dynograph, a now-obsolete brain-wave recording machine, and the student confronted the formidable mechanical challenge of calibrating it for eye movements. After months of frustrating trial and error, he arrived at a method whereby he essentially added a new eye “channel.”

The eyes act like tiny batteries with a difference of electrical potential occurring between the cornea and retina. Aserinsky figured out where to paste electrodes around the eyes of sleeping subjects in order for these leads to transmit this potential to the Dynograph—and later, to a modern electroencephalograph—for a paper-and-ink recording. He also deduced how to distinguish, from among the simultaneous pen tracings recorded by the machine, those deflections that signified electrical changes in eye movements. Both of these feats required months of disciplined effort. An electroencephalograph’s paper recording of the electrical changes is called an electrooculogram (EOG); its graphic display of brain-wave activity is an electroencephalogram (EEG).

Between October 1952 and May 1953, Aserinsky conducted dozens of nighttime sleep sessions during which he continuously recorded subjects’ brain electrical activity, often collecting a half-mile length of polygraph paper. Upon analyzing the EOGs, Aserinsky detected a “rapid, jerky, and binocularly symmetrical” eye movement at regular intervals during a night’s sleep, coinciding with periods when his subjects, upon being awakened, said they had been dreaming. To corroborate his graphic conclusions, he directly observed subjects’ eyes while they slept and saw the periodic rapid movements for himself. Although not hands-on, Kleitman supervised all of Aserinsky’s actions and exactingly scrutinized his data.

In September 1953, the two investigators reported Aserinsky’s findings of eye motility and concomitant physiological phenomena in Science.15 Before publication, however, they heatedly argued. Aserinsky begrudged the “reserved, almost reclusive” professor authorship on the paper and hastily left the university in June, receiving his doctorate in absentia. He also refused to acknowledge the contribution that second-year medical student, William Charles Dement (M.D., 1955; Ph.D., 1957, Chicago), made in conducting some of the nighttime sleep sessions, stubbornly insisting that the REM discovery involved no “teamwork.”

A 1955 article credited to both Kleitman and Aserinsky identified two types of ocular motility that occurred regularly and for relatively fixed durations during a night’s sleep: “slow eye movements” and “rapid eye movements.” Using polygraph readings, they correlated these rapid eye movements with an increase in heart rate, respiratory rate, and bodily activity, such as facial movements and vocalization, and with a low-voltage EEG pattern from the frontal and occipital areas of the brain. They also reported that three-fourths of the twenty-seven subjects whom they awakened during rapid-eye-movement periods claimed to have been dreaming.16

After Aserinsky left Chicago, fading into what would be a lifelong, troubled obscurity, Dement and Kleitman refined the techniques of all-night sleep recording and definitively characterized sleep. They established the relationship between REM sleep—an acronym coined by Dement—and dreaming and identified the brain-wave variations that recur cyclically during REM sleep and non-rapid-eye-movement (NREM) sleep throughout a night. They differentiated and classified sleep into REM and NREM, which they, in turn, divided into four progressive stages distinguishable by brain-wave activity: Sleepers feel drowsy in Stage 1 NREM; they are in deep sleep by Stage 4.

According to Dement and Kleitman, a person experiences NREM sleep for about sixty to ninety minutes before the occurrence of his or her first REM sleep cycle. NREM and REM sleep cycles then alternate in approximately ninety-minute intervals throughout a night, with REM consuming about 20 to 25 percent of total sleep.17

Dement became the king of sleep research. He knew what he was doing, and he was persistent.

While still a medical student, Dement had shown that schizophrenics, whose hallucinations bear a striking similarity to dreams, experience rapid eye movements during sleep as often as healthy subjects. He followed up this research with extensive studies of the psychological effects of REM-sleep deprivation and the REM-sleep patterns of schizophrenics and depressives.19

(The story continues with Sjoerdsma’s research into sleep and the role that serotonin plays, if any.)

I omit all of the endnotes in this excerpt, except endnote 15, which notes the seminal report:

(Pictured below are Dr. Nathaniel Kleitman (left) and an associate managing daily life in the darkness of an underground chamber at Mammoth Cave, Ky., during the month the sleep-and-wakefulness researcher spent there trying to adjust to a 28-hour schedule.) 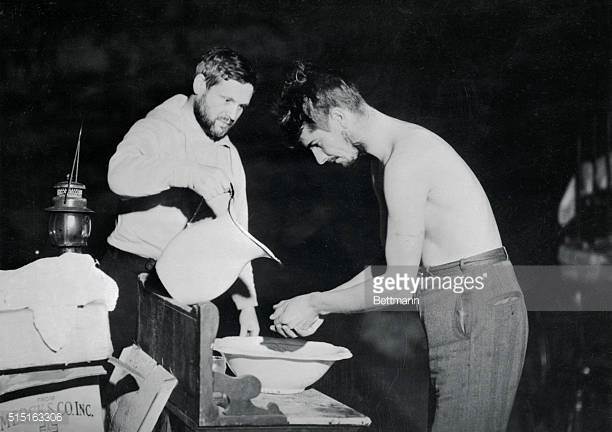