2/10/18: PARKINSON’S DISEASE: The Discovery of L-DOPA Treatment: Part one of two; the Biochemical Breakthroughs 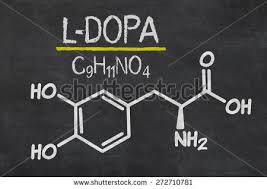 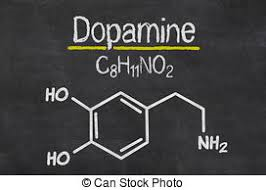 Recent news that singer/songwriter/musician Neil Diamond, 77, has Parkinson’s disease put me in mind of the unusual process of discovery that led to the first effective treatment of this progressive neurogenerative disease. I detail this process in my book, “Starting With Serotonin: How a High-Rolling Father of Drug Discovery Repeatedly Beat the Odds,” because my father had a role in it.

Parkinson’s disease (PD) is a central-nervous-system disorder that affects movement. The area of the brain that degenerates with Parkinsonism, which still has no known cause or cure, determines the nature of its symptoms. (See more about this below.)

PD usually develops gradually and manifests first as a tremor, or rhythmic shaking, in the hands, fingers, and/or an extremity. Hallmark symptoms of PD are tremors, muscular rigidity, and slowed movement (aka bradykinesia). Other symptoms include impaired posture and balance; a loss of involuntary (unconscious) movements, such as blinking or swinging your arms when you walk; and speech changes, the tendency being to speak softer, quicker, in a slurred fashion, and/or with hesitation.

Those of you who study the origins of Western medicine will be interested to know that Galen, the prominent Greek physician and surgeon who influenced just about every scientific discipline, first described Parkinson’s disease as “shaking palsy” in AD 175. The disorder is named for James Parkinson, an English physician who discussed six cases of what he called paralysis agitans in the 1817 article, “An Essay on the Shaking Palsy.”

Sixty years after Parkinson’s essay, Jean-Martin Charcot (1825-93), the brilliant French neurologist who laid the foundation for modern neurology, continued the London doctor’s studies and honored his predecessor by giving the disorder his name.

I now fast-forward more than 100 years and pick up the story of Parkinson’s disease and its treatment, with some editing and a lot of explanation, in chapter 15 of my book. As usual, I omit the endnotes.

In 1966, George C. Cotzias, a neurologist at Brookhaven National Laboratory in Upton, New York, fed huge amounts of oral L-DOPA to Parkinson’s disease patients and ignited a therapeutic explosion that had been a decade in the making.

Cotzias’s breakthrough traced back to 1955, when several investigative groups first observed that injecting animals with reserpine made their muscles rigid, like the rigidity of Parkinsonism. Among them, however, only Swedish pharmacologist Arvid Carlsson (b. 1923) thought to give reserpine-treated animals the catechol-amino acid, L-DOPA. L-DOPA reversed their immobility.

[L-DOPA is the amino-acid precursor to dopamine, epinephrine, and norepinephrine, compounds in the body that are known as catecholamines because of their chemical structure. L-DOPA is enzymatically converted into the various catecholamines. If this is too much biochemistry for you, just know that you must have L-DOPA in your brain in order to have dopamine, which is an important neurotransmitter.

[Reserpine was a tranquilizer and antihypertensive marketed as Serpasil® by the Swiss pharmaceutical company, Chemical Industrial Basel, aka Ciba. Ciba chemists culled reserpine, an alkaloid, from Rauwolfia serpentine, a climbing shrub in India that healers had used for centuries to treat snake bites and assorted other maladies. My father gave reserpine to his hypertensive patients in the National Heart Institute at the National Institutes of Health (NIH) whenever he wanted to lower blood pressure quickly.

[In breakthrough research done in the mid-1950s at the National Heart Institute’s Laboratory of Chemical Pharmacology, chemist Parkhurst Allan Shore showed that reserpine releases serotonin, about which next to nothing was known then, in the brains of animals. Shore theorized that this release might be the tranquilizing mechanism of Serpasil®.

[Now, back to Parkinson’s disease.]

Carlsson, who would receive the 2000 Nobel Prize in Physiology or Medicine for his dopamine work, was blessed with good timing. He had a one-year sabbatical (1955-56) in the Laboratory of Chemical Pharmacology that coincided with construction there of the first-ever spectrophotofluorometer [which enabled the measurement of serotonin and the catecholamines in tissue extracts], Shore’s reserpine experiments in mice, and the discovery that the Rauwolfia serpentina compound releases serotonin.

[Dad recalled:] Arvid’s background was in bone metabolism. While he was in [the chemical pharmacology lab], he got interested in amines, especially the catecholamines, and had access to the Aminco-Bowman spectrophotofluorometer. After he left the NIH, Carlsson obtained the first spectrophotofluorometer in Sweden at the University of Lund.

[An amine is a compound with an ammonia group (NH2) in its chemical structure. The NH2 makes it pharmacologically active. Serotonin, dopamine, norepinephrine, and epinephrine are all amines.]

After he returned to Sweden in 1956, Carlsson demonstrated with the spectrofluorometer that not only does reserpine increase serotonin release, it depletes dopamine and stores of the other catecholamines—an observation independently reported by German-born British pharmacologist Marthe Vogt—and causes transmission failures in the adrenergic system. [Simply stated, the adrenergic nervous system consists of those nerves, tissues, and organs in which norepinephrine and epinephrine act as the neurotransmitters.]

In 1957, British pharmacologist K.A. Montagu tentatively identified a substance “X,” found in animals brains, as dopamine. Within a year of her report, Carlsson and his colleagues definitively established dopamine’s presence in the mammalian brain. They also showed that norepinephrine and dopamine exist in roughly equal quantities in the brains of many mammal species, but distribute in markedly different ways. Carlsson calculated that 80 percent of animal brain dopamine is concentrated in the caudate nucleus and putamen, two components that make up the brain’s corpus striatum.

The corpus striatum is a subcortical mass of paired nuclei and fibers (also called the basal ganglia) that are involved in motor activities. The interconnections of this system make up complex circuits.

Carlsson was able to apply the spectrophotofluorometer, a sensitive light apparatus that picked up a chemical compound’s fluorescence over a broad range of both visible and invisible wavelengths, to animal tissue and to detect and quantify dopamine. Heretofore, dopamine had been difficult to assay because its pharmacological activity is much lower than that of the other catecholamines. Carlsson then mapped dopamine in animal brains.

Carlsson also injected L-DOPA into normal and reserpinized rabbits and showed that it caused a marked increase in the level of their brain dopamine. This meant that DOPA penetrated into the brain, where it was apparently decarboxylated to form dopamine.

The abundance of dopamine in the corpus striatum suggested to Carlsson that it had a role in motor function, and, thus, perhaps, in Parkinsonism. Although Carlsson had the Swedish equivalent of a medical degree, as well as a Ph.D., he had no interest in parlaying his results into humans. But clinicians immediately picked up on his lead.

L-DOPA GIVEN TO PD PATIENTS

Convinced that the dopamine brain deficiency was an underlying cause of the neuromuscular disorder, not just a peculiar finding, Hornykiewicz decided to treat Parkinson’s patients with dopamine replenishment. He faced a major obstacle, however: Unlike L-DOPA, dopamine does not freely penetrate the blood-brain barrier, which is a protective membrane within the capillaries that filters the substances that pass into the brain’s extracellular space.

In fact, when Hornykiewicz and his colleague, neurologist Walther Birkmayer, gave dopamine to Parkinson’s patients, their tremors actually worsened!

Hornykiewicz and Birkmayer achieved greater success with single injections of L-DOPA, enthusiastically reporting in 1961: “Bedridden patients who were unable to sit up, patients who could not stand up from a sitting position, and patients who, when standing, could not start walking, performed . . . all these activities with ease. They walked around with normal associated movements and they even could run and jump.”

This effect peaked within three hours and lasted, with diminishing intensity, for twenty-four hours. Contemporaneously, Barbeau and his colleagues in Montreal gave oral L-DOPA to Parkinson’s patients and observed a lessening of their muscular rigidity.

While Hornykiewicz and Barbeau independently made strides in Parkinsonism research, they failed to thwart the disease’s progress or to relieve sufferers of its painful symptoms long-term. Their L-DOPA therapy seemed to be yet another unfounded hope.

[According to my father:]

Hornykiewicz was on the right track. He just didn’t go far enough. But that’s the way science is. It’s the last person who gets all of the credit.

Thanks to Hornykiewicz, a more detailed chemical image of the brain of a Parkinson’s patient emerged. Not only does his or her corpus striatum lack dopamine, but the substantia nigra,* a small, dark pigmented area in the basal ganglia, lacks the normal amount of melanin. This knowledge proved pivotal to George Cotzias.

(I continue the L-DOPA story in a blog post tomorrow.)

*It now has been  known for some time that Parkinson’s disease patients experience nerve-cell loss in their substantia nigra. Although it is often referred to as one basal-ganglia structure, the substantia nigra actually has two functionally and anatomically distinct portions, both of which are located in the midbrain. The neurons (nerve cells) in these regions, which appear dark under a microscope—hence the description “nigra,” meaning black—produce dopamine.