1/21/17: STARTING WITH SEROTONIN; SERENDIPITY AND ZIG-ZAGS: The Discovery of the First-Ever Antidepressant 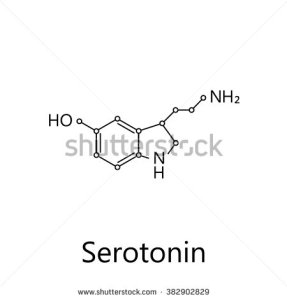 My father, whose biography I wrote in “Starting With Serotonin: How a High-Rolling Father of Drug Discovery Repeatedly Beat the Odds,” was a medical pioneer in the 1950s and ’60s at the National Heart Institute of the NIH. In the early ’50s, he did ground-breaking research into serotonin, a key neurotransmitter about which next to nothing was known when he started.

Dad had read that when serotonin was given intravenously to a person, it dramatically elevated his/her blood pressure. He, therefore, hypothesized that by manipulating an enzyme in the serotonin metabolic pathway—serotonin is synthesized in the body from the amino acid precursor, tryptophan, and ultimately degraded into a metabolite that is excreted in urine—he might be able to lower a person’s blood pressure and, perhaps in time, develop a drug to treat hypertension, which regularly debilitated and killed people.

“When I went home at night,” he told me, “I would keep my fingers crossed that none of my patients would stroke out before morning. They’d get strokes, and we couldn’t do a damn thing.”

Dr. Al did, in fact, discover an early antihypertensive that is still on the market—Aldomet, better known as methyldopa—but it is not one that has any effect on serotonin. Without his serotonin studies, however, he would not have had the knowledge or the investigative leads to zig-zag to Aldomet. He always said that he never did anything in a straight line.

I thought about this recently when I was watching an episode of my new favorite old British detective series, “A Touch of Frost,” and the coroner mentioned the drug, isoniazid. I recognized isoniazid immediately as a 65-year-old tuberculosis drug, one that was synthesized with another compound that turned out, serendipitously, to be the first-ever antidepressant. Here is most of the story as I tell it in “Starting With Serotonin,” without the endnote material:

“In 1951, the Swiss drug company, Hoffman-LaRoche, synthesized two new compounds to treat tuberculosis: isoniazid and its chemical cousin, iproniazid. (endnote) After clinical trials at Roche’s Nutley, New Jersey, division showed that both effectively treated the infectious disease, which still killed about ten people per 100,000 annually in the United States, the company quickly marketed isoniazid and iproniazid as Romifon® and Marsilid®, respectively. (endnote)

“Although isoniazid proved the superior TB fighter, it was iproniazid that garnered the most attention, as well as consternation.

“Given to tuberculosis patients at the dosage necessary to attack the tubercle bacillus, iproniazid over-stimulated some patients’ central nervous systems, causing psychoses, terrifying nightmares, nervousness, restlessness, depression, and other assorted unpleasantries. Remarkably, though, the compound brought elation and euphoria to other patients; these once-bedridden souls were ‘dancing and singing in their wards.’ (endnote)

“It turns out the Jekyll-Hyde drug was a gift: The gods of serendipity had blessed Roche with the first-ever antidepressant, but for years the Swiss company, anxious about its hazards, refused to accept it.

“Had it not been for Dr. David M. Bosworth, a surgeon and chief of orthopedics at New York’s St. Luke and Polyclinic Hospital, Roche would have discontinued sales of Marsilid entirely. Bosworth insisted that not only was iproniazid superior to isoniazid for tuberculosis of the bone and the joint, but it also enhanced patients’ healing process. When his anorexic consumptive patients took Marsilid, they felt ravenously hungry, ate accordingly, and rapidly gained weight. (endnote)

“A year after the drug’s synthesis, prominent Northwestern University biochemist Ernest Albert Zeller uncovered its mechanism of action in animals: Marsilid blocked the enzyme, monoamine oxidase (MAO). But Zeller had no way of knowing if Marsilid also inhibited MAO in humans and if this blockage actually caused its antidepressant effect. (endnote)

“Because of Bosworth’s advocacy, Marsilid remained on the market, and early antidepressant clinical studies occurred, albeit to ill fate. The supervising physician in one major study became so discouraged by patients’ inconsistent improvement that he hastily terminated trials. He failed to appreciate what became common knowledge later: A patient must take Marsilid for two weeks before its mood-elevating effect kicks in. Later efforts in 1952-53 to treat psychiatric patients with the drug largely focused on its tranquilizing action, and, therefore, also ended in disappointment. (endnote)”

Using Marsilid and a breakthrough assay that measured the amount of serotonin’s metabolite in urine, my father, who was an M.D.-Ph.D. in pharmacology, and his biochemist partner, Sidney Udenfriend, Ph.D., proved that serotonin in human beings was metabolized (broken down) by the enzyme, monoamine oxidase.

This was a “major finding,” he told me. “People didn’t know much about what happened [to serotonin].”

Sjoerdsma and Udenfriend also showed that Roche’s drug Marsilid did, in fact, block the action of monoamine oxidase in intact animals (Zeller had experimented on animal tissues) and in humans. Subsequent clinical studies with Marsilid—which lasted much more than two weeks—established its efficacy as an antidepressant. It was the first-ever antidepressant and the first-ever monoamine oxidase inhibitor. (Later, Dad would have occasion to figure out why patients on a monamine oxidase inhibitor who ate cheese sometimes suffered from life-threatening hypertensive reactions. Their blood pressure would go through the roof. That’s another fascinating discovery story.)

Marsilid was a great therapeutic discovery, but the National Heart Institute was not interested in depression research. My father was looking for a way to control high blood pressure.

In the course of doing his serotonin research, however, he took a detour that would launch his reputation internationally at the age of 30. He diagnosed and defined a new metabolic disorder, characterized by deep purple facial flushing and chronic diarrhea, that he called the Malignant Carcinoid Syndrome. Carcinoid tumors produce . . . serotonin. He became the expert on carcinoid, which he was to learn quite a bit more about in subsequent studies.

I am very proud of the work that my father did for 40 years as a founding father of, and leader in clinical pharmacology and an early proponent and expert practitioner of rational design in drug discovery. I spent six years researching the content for “Starting With Serotonin,” interviewing quite a few people who knew and worked with Dr. Al. The book is a critical work of scholarship, not a valentine. I don’t conceal his warts.

If you would like to purchase my book and read about more far-reaching clinical scientific escapades, please send a $20 check, payable to Improbable Books, to P.O. Box 1615, Kitty Hawk, NC 27949. The book usually retails for $27.50, before shipping and handling. I will send you an autographed copy and pay the postage.