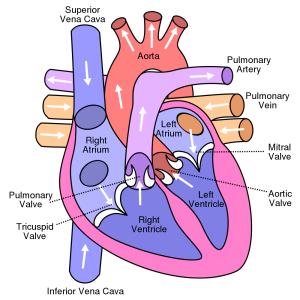 Your heart is an electricity-powered muscular pump, which, by contracting and relaxing (beating), controls the circulation of arterial blood throughout your body. Age renders this impressive organ less efficient, but it does not make it diseased.

I delve into the anatomy and physiology of the heart in my book, “Our Parents in Crisis: Confronting Medical Errors, Ageist Doctors, and Other Healthcare Failings,” and cover much of what I’m about to explain in a chapter titled “The Aging Body.” In other chapters of my book, I look at disorders of the heart. During National Heart Month, my publisher is offering a mark-down price of “Our Parents in Crisis,” from $27.95 to $20, with free shipping. Please click www.improbablebooks.com/crisis, if you’re interested.

I have decided to make this blog, in which I highlight age-related heart changes, not exhaust them, a two-parter. I think it is important to give you foundational material along with observations about the effects of age on your heart and cardiovascular system.

To understand how your heart ages, you first need to know, basically, how it works.

Your fist-sized heart has two sides, designated left and right, from your point of view. Each side has two chambers, an upper chamber called an atrium and a lower chamber called a ventricle. The four chambers are muscles, not arteries, as people commonly misunderstand.

A heartbeat begins with an electrical signal that emanates from the pacemaker cells of the sinoatrial (SA) node, a small mass of cardiac muscle fibers located in the rear of your right atrium. The SA node is the natural pacemaker of the heart. When it is functioning normally, it produces what is known as normal sinus rhythm.

Upon being stimulated by an electrical impulse, the atria (the two upper chambers) fill their respective ventricles with blood, which the ventricles, also activated by electrical impulse, propel outward. The two sides of the heart function independently of each other to pump blood into two different circulatory systems. They are the systemic circulation (left side) and the pulmonary circulation (right side). The heart also has its own circulation, which is served by the two main coronary arteries and their branches.

The larger left heart pumps oxygenated blood out into the body (the system), including the head and brain, through big arteries that gradually decrease in size until they end in microscopic capillaries that are wide enough for only one blood cell to pass. It is in the capillaries that the vital exchange of oxygen, carbon dioxide, nutrients, and waste occurs.

The right atrium primes its ventricle with this return venous blood, which is not only lacking oxygen, but now contains carbon dioxide that must be expelled into the air via the lungs. The right ventricle pumps this return blood through the pulmonary trunk, which branches to form the right and left pulmonary arteries that go to their respective lungs. Through the respiratory exchange process, this blood releases carbon dioxide and receives oxygen. Oxygen-enriched blood then flows through the four pulmonary veins—two from each lung—into the heart’s left atrium, thus completing the pulmonary circulatory loop.

The walls of your heart’s four chambers have three layers. Aging affects each of these layers, the most important of which is the thick muscular middle layer, called the myocardium. The myocardium is responsible for your heart’s contractions.

With normal aging, the amount of fibrous (hard) tissue within the myocardium increases, while the number of myocytes—which are muscle cells—declines.

When cardiac myocytes reduce in number, the remaining cells react by increasing in size. They compensate. In similar fashion, fibrous tissue replaces the lost myocytes in order to contain the damage. This increase in fibrous tissue causes the myocardial layer to thicken. Beginning around age 60, the number of pacemaker cells in the sinoatrial node also start to progressively decline.

Older hearts, therefore, have fewer active cells (myocytes, pacemaker cells) and more fibroblasts, which produce collagen (a fibrous protein) in the heart’s connective tissues. Increased collagen leads to increased rigidity and other damaging consequences. When combined with changes in the mycocytes, these collagen changes promote greater myocardial stiffness and a decline in ventricular functioning.

Fat and calcification may accumulate on the outermost layer of the heart, which is the epicardium; and the endocardium, which is the innermost, may become fibrotic (scarred). The mitochondrial DNA in cardiac muscle cells undergoes damage, as well.

Bottom line: After performing well for many decades, the normal human heart has to start working harder to pump the same amount of blood through the body.

Your vast network of arteries also undergoes prominent aging. The walls of all of your large, blood-distributing arteries, including the aorta, its divisions, and main branches, thicken with age and become less elastic and more resistant to blood flow. These changes can promote hypertension (high blood pressure).

Like the walls of your heart’s chambers, your arterial walls also have three layers.

Thickening of the aorta results from cellular changes mainly in the intima, the innermost layer. The thickness of both the intima and the middle wall layer, which is the media, in the carotid arterial walls usually increases two- to three-fold between the ages of 20 and 90. Your two carotid arteries branch from the aortic arch—a part of the aorta that curves above the heart between the ascending and desending aorta—and feed your brain.

Aging big arteries also elongate, dilate, and become tortuous (winding or twisting), further narrowing their lumens (openings). It is not uncommon for a very old person to have a tortuous aorta.

While the total amount of collagen and elastin declines in arteries, the ratio of collagen to elastin increases. After its age-related loss, the remaining elastin, for reasons such as calcification, becomes more rigid. (Before its reduction, elastin makes up about 90 percent of arterial elastic fibers.)

Your heart responds to older stiffened and/or narrowed arteries by raising systolic blood pressure, and, therefore, pulse pressure. Pulse wave velocity (PWV)—the speed with which the pressure radiates through the arteries—traditionally has been linked to structural changes in the blood vessels, including increased collagen, reduced elastin, elastin fractures, and calcification. It is a measure of arterial stiffness.

Stiffness of the aorta and the pulmonary arteries is thought to play a role in increasing the heart’s afterload and in decreasing coronary artery flow. The afterload is the amount of pressure that the ventricles must work against in order to pump blood out.

When arterial walls thicken and arteries stiffen, your likelihood of developing atherosclerosis increases. But these structural changes alone do not cause this serious vascular disease. (See my blogs of Feb. 1 and Feb. 8 for a discussion of atherosclerosis.)

Although the walls of your veins have the same three layers as arteries, they have less smooth muscle and connective tissue and, thus, are thinner and less rigid. Because they do not recoil, veins do not need elasticity. Also, the heart does not supply pressure to move blood through veins, just through arteries. Venous blood is propelled back to the heart by skeletal-muscle contractions, not by heart contractions.

Hypertension is both a consequence of arterial damage or disease and a risk factor for cardiovascular disease. (See my Feb. 8 blog for info about your 10-year cardiovascular-disease risk.)

According to my research, from 60 to 80 percent of all people age 80 and older have high blood pressure. Despite this prevalence, hypertension is not inevitable with aging. I repeat: it is not inevitable. Individual factors such as diet, exercise, fitness, use of nicotine products, family cardiovascular-disease history, etc., influence arterial condition and, thus, blood pressure.

To understand a blood-pressure reading, you must understand the “cardiac cycle.” This cycle begins with an electrical signal from the SA, as I mentioned, and consists of three phases: 1) a first phase of relaxation, when both the atria and ventricles are in what is known as diastole; 2) a second phase when the atria contract to fill the ventricles and ventricular systole starts; and 3) a third phase when ventricular ejection occurs. All of this happens in the span of just one heartbeat, which lasts only 0.85 seconds.

In general, systolic function (during contraction) is well-preserved in older people when they are at rest. The same is not true of diastolic function in the resting older heart. The rate of left ventricular filling in early diastole (the relaxation phase) progressively slows in people after age 20, so that by age 80, it is reduced, on average, by 50 percent.

A number of structural changes influence this slowing: Stiffness in the aorta increases the heart afterload, which compels the left ventricle to prolong contraction time at the expense of diastolic function. An increase in collagen deposits and alterations in elastin also combine to increase left ventricular stiffness, which reduces the chamber’s compliance and thereby impairs its passive filling.

To compensate for early diastolic slowing, the left atrium contracts more forcefully, causing an increase in late or so-called end diastolic filling. Increased end diastolic filling pressure can cause left atrial dilatation, which can lead to atrial fibrillation and other arrhythmias in the aging heart. It also causes an enlargement of the left-ventricular wall, called hypertrophy.

Loss of the early diastolic contraction can result in a marked reduction in diastolic volume, which predisposes the aging heart to diastolic heart failure. This type of heart failure accounts for up to 50 percent of all heart failure in patients 65 and over.

Heart failure, whether chronic or acute, usually occurs over time because of coronary artery disease or hypertension, which leaves the heart too weak or stiff to fill and pump efficiently. When failure occurs on the heart’s left side, fluid may back up into the lungs. This is the status in congestive heart failure.